PINE MOUNTAIN – Chief Judge Pamela D. South of the Gwinnett County State Court received the Ogden Doremus–Kent Lawrence Award from the Council of State Court Judges. The award is the Council’s top honor and was presented to Chief Judge South at its annual meeting at Callaway Gardens on October 12, 2022.

Senior Judge Joe Iannazzone, a past recipient of the Ogden-Doremus Award, presented the award and remarked that Chief Judge South “is known for legal acumen, efficiency, patience, and respect for everyone appearing in the courtroom (or on Zoom). Our honoree handled a division of the Court’s DUI Treatment Court, developed a Mental Health Diversion Program, and serves on the budget committee, helping steer the court through some lean budget years.” 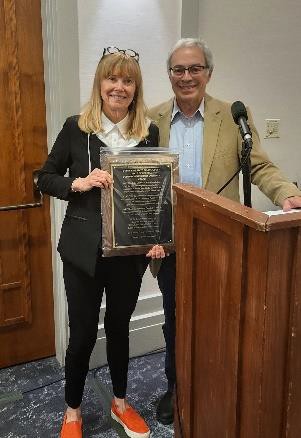 Chief Judge South began her legal career in private practice until she answered the call to public service and became an assistant district attorney in the Gwinnett County District Attorney’s Office. She remained an assistant district attorney for ten years, where she headed the Child Protection Team, tried many difficult cases, and developed a reputation as a fierce advocate for victims. In 1999 she was appointed as a full-time judge in Gwinnett’s Magistrate Court, where she served until 2001, when Governor Roy Barnes appointed her to the state court bench.

The Ogden Doremus–Kent Lawrence Award is named after two judges who demonstrated high standards of judicial ethics and professionalism, and community involvement. Judge Ogden Doremus was an engaged environmentalist who created organizations to save the estuaries of coastal Georgia. Judge

Kent Lawrence is revered as the “Father of DUI Accountability Courts” in Georgia.